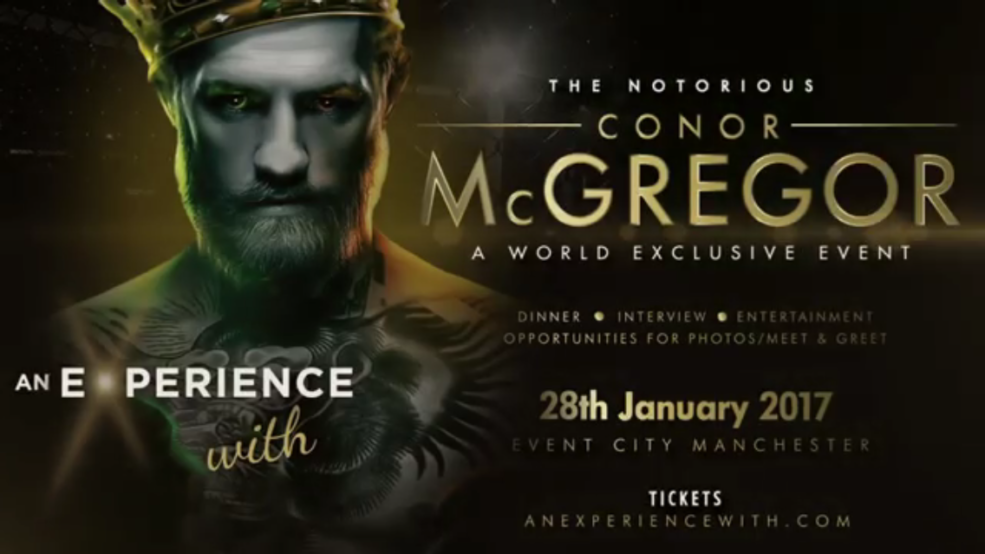 It was announced today that UFC Lightweight Champion Conor McGregor will be interviewed by MMA reporter Ariel Helwani in Manchester, England on January 28 as part of ‘An Experience With Conor McGregor,” an event hosted by the Olexy Group.

The paid event will feature an hour-long interview with ‘The Notorious,’ live entertainment, dinner, a chance to win prizes, and for a few lucky attendees — the opportunity to meet Conor McGregor face-to-face.

McGregor hasn’t stepped foot inside the octagon since he demolished Eddie Alvarez at UFC 205 and became a two-division champion. Conor instead has prepared for the birth of his first son, and had previously reported that he would remained sidelined until May of this year at the earliest.

Honored and excited to be a part of this. Who will be in Manchester on Jan. 28? One hour sit-down w/ McGregor in front of a live audience. https://t.co/DlXpwHD2RH

Tickets are still available for the event at AnExperienceWith.com and the Olexy Group’s post about the January 28 event can be read below:

‘An Experience With’ Conor McGregor #ANEXPWITH

In a WORLD EXCLUSIVE, the notorious Conor McGregor will appear at a Black Tie Dinner experience at Event City Manchester on the 28th January 2017.

Conor McGregor has risen to stardom, renowned for his hilarious one-liners, extravagant lifestyle and the trash talking of his opponents. It was in 2014 when Conor’s stardom began to gather momentum. McGregor stamped his authority on the game with a predicted first round stoppage victory over Diego Brandao in his hometown, announcing post-fight; “We’re not here just to take part, we’re here to take over”.
WHAT TO EXPECT..

A WORLD EXCLUSIVE live on-stage interview with the man himself Conor McGregor.

The event filmed and produced by a major TV network, first of a series of global showcases of ‘An Experience With’

On stage, comedy act from a social media sensation TBA.

Stunning auction with signed bespoke McGregor memorabilia, with something for every budget.

HUGE production with unseen McGregor video and photos shown throughout the interview on giant screens.

Chances to WIN McGregor related prizes in the event Prize Draw.
Official After-Party ‘Notorious After Dark’ at the purpose built nightclub on site at Event City.