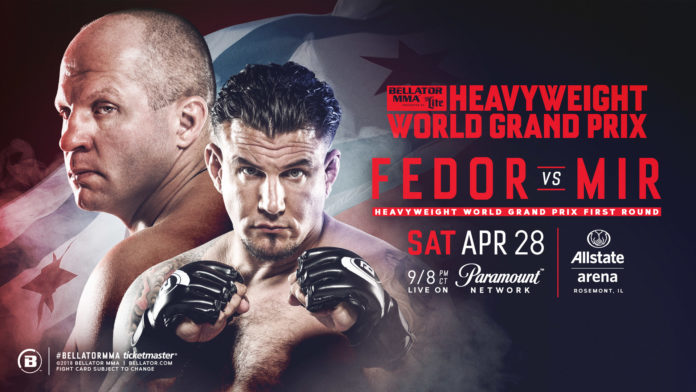 An exclusive online presale for this event takes place Wednesday January 24 and Thursday January 25, with tickets going on-sale to the general public on Friday January 26 at 10 a.m. CT. Tickets for the event start at just $30 and are available at the Allstate Arena box office and Ticketmaster.

The event, presented by Miller Lite, will be broadcast live and free on Paramount Network (formerly Spike) at 9 p.m. ET/8 p.m. CT, while preliminary action will stream on Bellator.com and globally on the Bellator Mobile App. Additional bouts will be announced in coming weeks.

A former PRIDE champion, “The Last Emperor” is one of the most revered and respected heavyweight fighters the sport has seen. Stone-faced and quiet, Emelianenko boasted one of the most impressive unbeaten streaks in the history of MMA, not losing a bout between 2001 and 2009. A multi-time world champion in MMA and Sambo, Fedor recently returned to the sport after a brief hiatus, accumulating two decisive wins since his return to action and taking on Matt Mitrione in an instant classic at Bellator NYC.

Frank Mir joined Bellator earlier this year following 15 years in the UFC where he became a two-time world champion, collected 16 victories and defeated a who’s who of heavyweight contenders, including Brock Lesnar, “Bigfoot” Silva, Antonio Rodrigo Nogueira and Mirko Cro Cop. Fighting out of Las Vegas, Mir set numerous records while competing with his former promotion, highlighted by the most fights (27), victories (16), and submissions (8) in heavyweight history. With 14 of his 18 career wins coming by way of knockout or submission, the Brazilian jiu-jitsu black belt will now try his hand in Bellator’s heavyweight division.

Bellator is a leading mixed martial arts and kickboxing organization featuring many of the best fighters in the world. Under the direction of veteran fight promoter Scott Coker, Bellator is available to nearly 1 billion people worldwide in over 160 countries. In the United States, Bellator can be seen on Paramount Network (formerly Spike), the combat sports television leader. Bellator is comprised of an executive team that includes top industry professionals in television production, live event orchestration, fighter development/relations, venue procurement, sponsorship creation/development, international licensing, marketing, advertising, publicity and commission relations. Bellator is based in Hollywood, Calif. and owned by entertainment giant Viacom, home to the world’s premier entertainment brands that connect with audiences through compelling content across television, motion picture, online and mobile platforms.

Paramount Network is a premium entertainment destination that pushes the limits of story-telling with bold original scripted and non-scripted series. Inspired by over a century of cinema, Paramount Network is where today’s brightest stars bring the experience of the big screen to every screen with stories that are immersive, inclusive, and deeply personal. 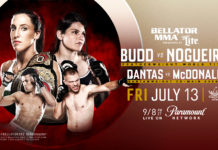 Countdown to Bellator 172: The G.O.A.T. Premiers Tonight at Midnight on...