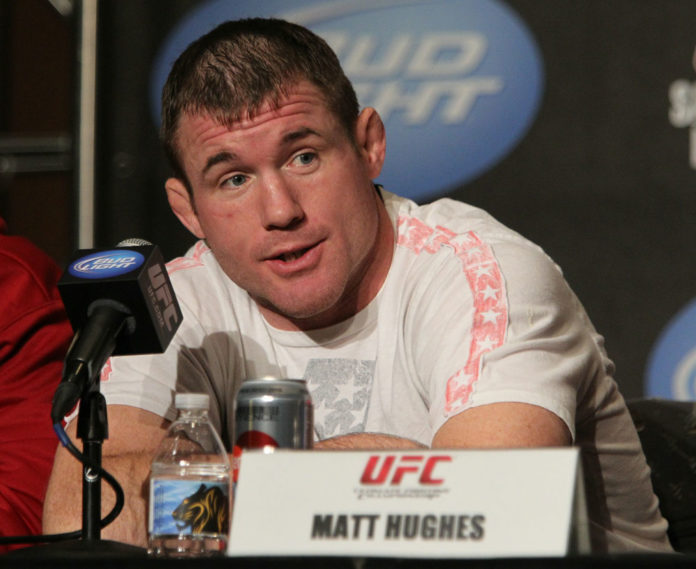 Matt Hughes hasn’t fought since a knockout loss to Josh Koscheck at UFC 135 back in 2011, but now nearly 6 years later, the former UFC Welterweight Champion has announced that if the stars align just right — he would return to active competition.

“If I could find an opponent that I think I could beat, I would go again,” Hughes told Joe Buck during the taping of an upcoming episode of AT&T Audience Network’s “Undeniable with Joe Buck.”

“Might even be talking to an organization about that — I could be in talks, maybe. That’s big news, nobody knows that by the way.”

Hughes stopped short of naming an exact organization or opponent, however, he did hint that the opponent might have been on the same show, in the same chair, in the past. That would limit the potential pool of fighters down to a handful and Royce Gracie would be the most likely option at that point. Gracie and Hughes fought back in 2006 at UFC 60 in a fight that saw the American dominate Royce at a catchweight of 175lbs. The fight was stopped at 4:39 of the very first round via TKO due to punches.

Gracie returned to action under the Bellator MMA banner last February against Ken Shamrock at Bellator 149, winning that fight via TKO in 2:22 of round 1, though there was some controversy afterward as Royce landed a clear low blow moments before he finished Shamrock with a series of strikes on the canvas.

Dana White appeared on the UFC Unfiltered podcast in December to discuss the termination of Matt Hughes and Chuck Liddell, who were originally promised positions for life by the longtime UFC president.

When another company takes over another company, it’s absolutely normal for them to come in and especially at the executive level, to let guys go. They have guys that they are going to bring in that will fill those positions. Some of those people that have been let go, they have their own people ready for those positions. It’s their company, they roll in and they put in their people, it’s absolutely normal. A lot of our executives were let go, a company as big as WME-IMG, they have a ton of people for these positions. The Chuck Liddell, Matt Hughes thing, during the ZUFFA era, those were my guys. I wanted them to retire, I respected these guys. They helped build this company when I was growing it and I told them both, I said, ‘Unless I drop dead or it comes to a position sometime where I’m not controlling how much money is being spent and all that stuff, you guys will get a paycheck until that day.’ And that day came. The thing with Matt and Chuck, it was a loyalty thing for me. It was my gift to them or being the guys that they were when me, Frank and Lorenzo, when it was our money.”

Rashad Evans Speaks After UFC 209 Loss to Dan Kelly: “My Time Away From The Cage Has Probably Cost Me A Lot.”

Georges St-Pierre and UFC Close to An Agreement, Who Will GSP Fight in His Octagon Return?

Champ to Champ: A look at Cody Garbrandt and Mike Tyson