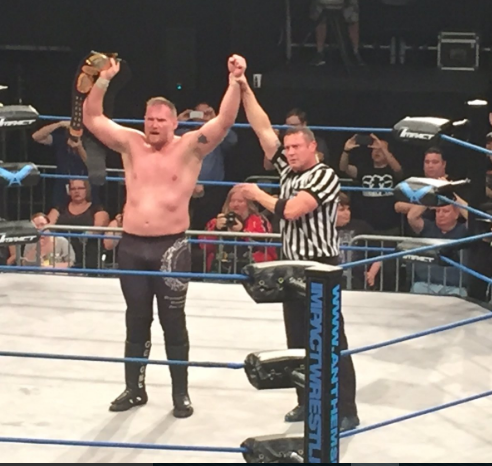 Josh Barnett returned to the world of Professional Wrestling on Thursday night as he stepped to the ring for a pair of matches at the latest TNA Impact Wrestling television tapings.

For a few moments — it appeared that Barnett added another ‘Big Gold Belt’ to his resume:

The decision was later overturned after the referee didn’t see Lashley pick out of a pinfall attempt, and the match was restarted. Bobby Lashley went on to defend his championship against the former ‘Babyfaced Assassin.’

Combat sports fans who are unfamiliar with ‘sports entertainment’ can think of TNA as the WSOF of Professional Wrestling.

The match ended in controversial fashion though, which seems to point to the two continuing to work together for a series of matches. It should be noted that these two had wrestled before, as the pair squared off back in 2011, in a contest Barnett won via Cross Armbreaker (a catch wrestling term for cross armbar).

Barnett had also wrestled another match earlier in the night as he defeated the wrestler ‘Bad Bones’ to set up the title match with Lashley. TNA tapes many shows on the same night that will later air in the following weeks, traditionally wrestlers are only expected to perform once per night.

Last month Barnett was flagged for his fourth potential anti-doping violation in his MMA Career. His looming 2-Year USADA suspension (substance dependent) will likely mean that his submission win over Andrei Arlovski will be his last mark as an active fighter- at least in the United States.

Barnett currently serves as an English commentator for New Japan Pro Wrestling, which can be seen on AXS TV. ‘The Warmaster’ had previously wrestled in NJPW from 2003 to 2004.

If Barnett’s accepting wrestling bookings, one can only speculate that he is no longer under contract with the Ultimate Fighting Championship.