The champ is here @madduxawesome 🏆 #AndNew

Cody ‘No Love’ Garbrandt defeated Dominick Cruz for the UFC Bantamweight Championship on Friday night’s UFC 207: Nunes vs. Rousey, but he didn’t win the fight by himself. Garbrandt’s source of strength was actually Maddux Maple, a cancer survivor that has been a part of ‘No Love’s’ career since the Team Alpha Male star was just a 19-year-old amateur boxer.

The media may get this story backwards time and time again out of the final UFC event of 2016, but, for the record — Maddux Maple was the one that gave Cody Garbrandt the strength to continue fighting against the odds, even when things felt hopeless.

“That little kid definitely helped change my life at a time when I needed a change, and I needed to grow up,” Cody said in 2015.

You see, Garbrandt’s father was a career criminal, and Cody didn’t have much support growing up as a result. Until he met Maddox Maple, a betting man would have gambled that Garbrandt’s future would take place behind bars and perhaps even under a heap of dirt. All of that would change after the young amateur fighter’s brother told him about a young boy from a surrounding town who was battling for his life.

This was over a year ago.. I’ve been fighting with Purpose! Two weeks out @madduxawesome So proud of you buddy!! #fbf #fuckcancer @ufc @seanshelby @danawhite

Since the two met back in 2011, you could say they have the same undefeated record — Maddux in his fight against leukemia and Cody (11-0) in mixed martial arts bouts against some the best bantamweight fighters on the UFC roster.

As Cody turned pro and began putting together a run towards the UFC, Maddux continued taking his chemotherapy pills. He did it for two straight years. But when he was seven, two years into his treatment, he began to lose his will to continue.

“Around December or maybe January of last year, he just started struggling taking them, he would swish them in his mouth for thirty seconds to a minute, every time,” Mic (Maddux Maple’s Father) says. “And it was like, buddy, that’s ten times worse, just try to swallow it. He just hit a mental block. Finally one night he was like, ‘I don’t want to do it any more. I don’t want to take any more pills.’ I’m like, oh no, we’re not quitting now! I was like, buddy, we’re almost done, we’ll be done in August, just keep fighting.”

That’s when Mic (Maple) texted Cody. That’s when the two — the fighter and the boy — made a pact to beat the long odds still in front of them.

“They talked,” Mic remembers. “Cody sent him a video and they talked. And he said, Maddux, ‘I need you to finish strong. I’m out here busting my butt and I think I’ve got a shot in a year or two of maybe getting to the big time. You’ve got to promise me…you face your treatment, you face these pills, you finish your chemo, you beat cancer and I promise you, I promise you, I will make to the UFC, win my fight, and you will be there.’

“And I swear to God, I swear to you, he ended up taking his pills that night and from the next day on, not one time, until treatment was over, did he complain or try to fight it. It was like, he had a mental block and Cody pumped him back up and he finished strong.”

After meeting with Team Alpha Male coach and owner Urijah Faber as an amateur, Cody Garbrandt was told that if he could win just five professional mixed martial arts bouts — he would be given a chance inside the UFC’s octagon.

Cody Garbrandt’s professional career got off to the perfect start as the Team Alpha Male fighter would go 5-0 in his first five fights. That record would jump to 10-0 inside the octagon before he would cross paths with Dominick Cruz, the longtime rival and antagonist to Team Alpha Male. Up until yesterday, December 30, Cruz was the also the UFC Bantamweight Champion of the world. 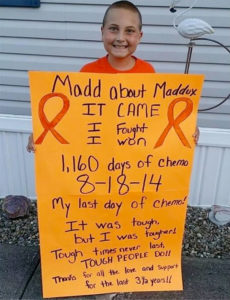 It would take all five-rounds, but ‘No Love’ would go on to rip the title away from Dominick Cruz at UFC 207 on December 30, as he was awarded a unanimous decision victory against ‘The Dominator.” Cruz hadn’t lost a fight since 2007, but on that night — the UFC Bantamweight Championship would end up around the waist of a child.

Before the fight, ‘No Love’ vowed to give the official UFC Championship belt to his Maddux, as Cody said he wanted his inspiration to have the real thing.

Cody Garbrandt had all the love in his post-fight interview with Joe Rogan, as the new 11-0 bantamweight champ said:

It’s been a great journey. I want to thank everyone that’s been a part of it, from the beginning til right now. I wouldn’t be here without a lot of support from them, especially this man right here (Maddux) — he really brought faith and redirection into my life. Maddux Maple was 5 years old and diagnosed with leukemia and fought (his ass off) to be able to walk with me down here and for me to finally be able to do this for him:

Cody Garbrandt and Maddux Maple’s journey to the UFC (as posted by Mic Maple) can be viewed below: