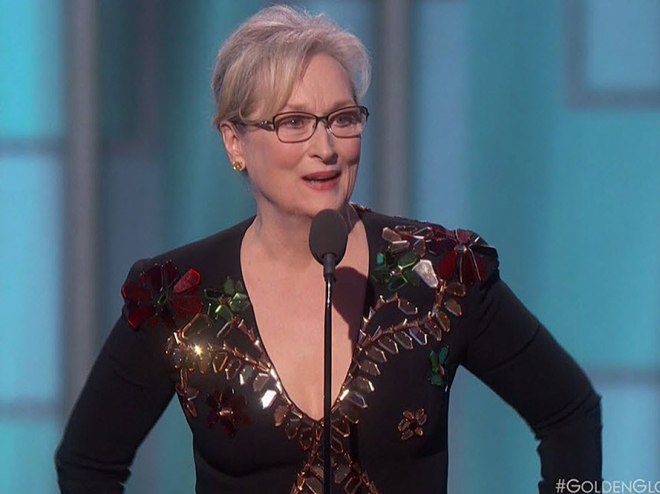 Meryl Streep received a lifetime achievement award at the Golden Globes on Sunday night, and during her acceptance speech took the opportunity to low blow to the world of Mixed Martial Arts.

“…Hollywood is crawling with outsiders and foreigners, and if you kick ’em all out — you’ll have nothing to watch but football and mixed martial arts — which are not the arts!“ said Streep.

Streep was in the process of slamming President-elect Donald Trump about his views on immigration when she seemed to imply that mixed martial arts lacked diversity, before voicing her opinion that the sport lacked the characteristics of ‘the arts.’

Five of the current 11 UFC Champions, including Amanda Nunes, Michael Bisping, Joanna Jedrzejczyk, José Aldo, and Conor McGregor,  were born outside of the United States.

Hey, I don't care about Meryl Streep's opinion about MMA anymore than I care about Skip Bayless's or Shannon Sharpe's.

As a martial artist and an MMA promoter, here is my open letter and #Bellator170 invite to the very talented #MerylStreep #GoldenGlobes pic.twitter.com/zostN22RAK

Definitions 3&4. Athletes are artists in their own right. Plus they're an incredibly diverse group. Don't be so close minded & judgemental☺️ pic.twitter.com/MLW71HQQ2K

Really weird to see someone talk about not discriminating then basically discriminate against an entire group of skilled, hard working ppl.

With all due respect to #MerylStreep… MMA may not be the "arts" but then again, neither was "Ricki and the Flash." #GoldenGlobes pic.twitter.com/jEENO3CC0M

#MerylStreep Dissing Trump I get but why the hate on MMA? MMA's also dominant by foreigners who come from all different parts of the world.😢

Meryl Streep just took down MMA, the NFL and Donald Trump's potential policies at the same time at the Golden Globes.