Garry Tonon will be taking on Antonio Carlos Junior, also known as “Cara de Sapato” (shoeface), at Submission Underground 3 this Sunday. Antonio (UFC record 8-2) is a middleweight Ultimate Fighting Championship veteran who trains out of American Top Team in Florida. Chael Sonnen was originally slated to face Tonon at SUG 3, but after it was announced Sonnen would be unable to compete — Carlos Junior was announced as his replacement.

Tonon asked for not one, but two top-shelf UFC contenders on 4 days notice when he heard about Chael’s removal.

“That’s a guy fans can get behind and cheer for.”

Submission Underground 3 will be live on Flograppling.com this Sunday at 3 p.m. PT — This will be a must-watch event, so don’t miss it! 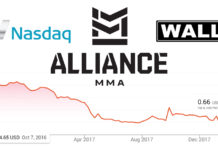 Rashad Evans Speaks After UFC 209 Loss to Dan Kelly: “My Time Away From The Cage Has Probably Cost Me A Lot.”

The Horrible MMA Decisions That Were Made in 2016 (Part 1)