Kevin Casey is ready to make his mark in Bellator.

The heavy handed striker looks to regain momentum in his new promotion with a win overÂ  Keith Berry at Bellator 170 Saturday night in Los Angeles. The fight will stream on Bellator.com.

Casey was a part of Chael Sonnenâ€™s team on The Ultimate Fighter 17, and like Chael, is coming from the UFC to Bellator.

We talked to Casey about being coached by Sonnen, and what match he would like to have if he went back to Japan. 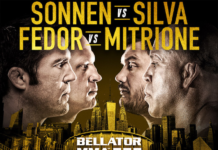